Posted at 17:56h in Blog, Uncategorized by Blake Schnebly

Student leaders made sustainability pledges and challenged their community to do the same!

For the past few months SustainingUS, with the help of Ben Brock, has been meeting with various student leadership groups at Riverstone International School to discuss the things that they want to see as part of a sustainability program at their school. The Outdoor Leadership, Students for Social Change and Athletic Leadership groups all have different goals and desires in the problems they want solved, but one thing seems to be consistent across all the groups: all of these students want to do something that causes a change, a change that matters.

How could one activity possibly fulfill all the goals of all of these interested parties? I suggested a sustainability pledge because I was moved by how pervasive and effective I perceived the University of Washington’s Sustainability Pledge was when I attended and worked there.

For several weeks we met and discussed what a pledge might look like, what some of the hot issues in sustainability are in the Treasure Valley are and what we, as individuals, could do about them. We also met to discuss what a “good” pledge looks like and discussed human behavioral tendencies and decision making processes to try to build the best pledges possible.

Students were challenged to come up with a pledge, preferably involving water (Idahoans use more domestic water per capita than any other state) which they could try over spring break.

The students found that pledges are an effective way of inciting behavioral changes and increasing personal awareness about the consumption of resources that we often take for granted in our daily lives. The project was such a success that the leadership groups invited the entire school community to make a Sustainability Pledge over Earth Week.

The pledge format we decided on is a simple google spreadsheet that can be shared with anyone in the community. It has a few pull down tabs and real time infographics built in so that people can see what others have pledged and what groups are pledging and what categories they are pledging in. We even displayed the graphs in real time when volunteers were staffing information tables during lunch hours and after school.

A pledge board was installed in the high school and many of the early pledges were posted there to inspire others to join. Posters next to the boards suggested pledge ideas and displayed information on sustainability topics in our region. Student volunteers were also available to help brainstorm pledge ideas. Students, faculty, staff, parents, siblings and alumni posted their pledges on the “virtual board” in the form of an open-shared Google document to show their commitment to their pledges as well. The Earth Week response was so successful that we decided to challenge everyone to continue their pledges for another week, (and to keep pledging open during this period). So far we have almost 120 voluntary pledges that people are doing to change their daily behavior so as to be more sustainable. This year over 50% of the pledges were related to water, as we suggested that people focus on that topic given our per capita daily tap water consumption is 168 gallons; I wanted to bring attention to that fact.

Some of my favorite pledges from this year so far are:

Screen recycling from classroom waste baskets at the end of the day.-Faculties and maintenance

Bring food scraps from home to one of the school’s 3 worm composters.

I will play outside after school for 30 minutes instead of playing inside.

I will ride my bike to school at least 3 days each week for the rest of the year.

I will use a timer to take shorter showers

I will learn how to compost and start doing it.

I will close my computer when not using it, and turn off unneeded lights

Only use reuseable food storage / transportation containers (no Ziplocks!)

I will convert garden-bed sprinklers to driplines and make sure my sprinklers are not overspraying onto pavement.

Use a rag to clean up spills instead of a paper towels.

Stop rinsing dishes before putting them in dishwasher.

Buy tubs of yogurt instead of individual yogurts. 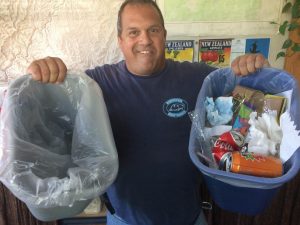 Todd (facilities and maintenance) displaying his pledge to pull recyclable materials from the trashcans over Earth-week! 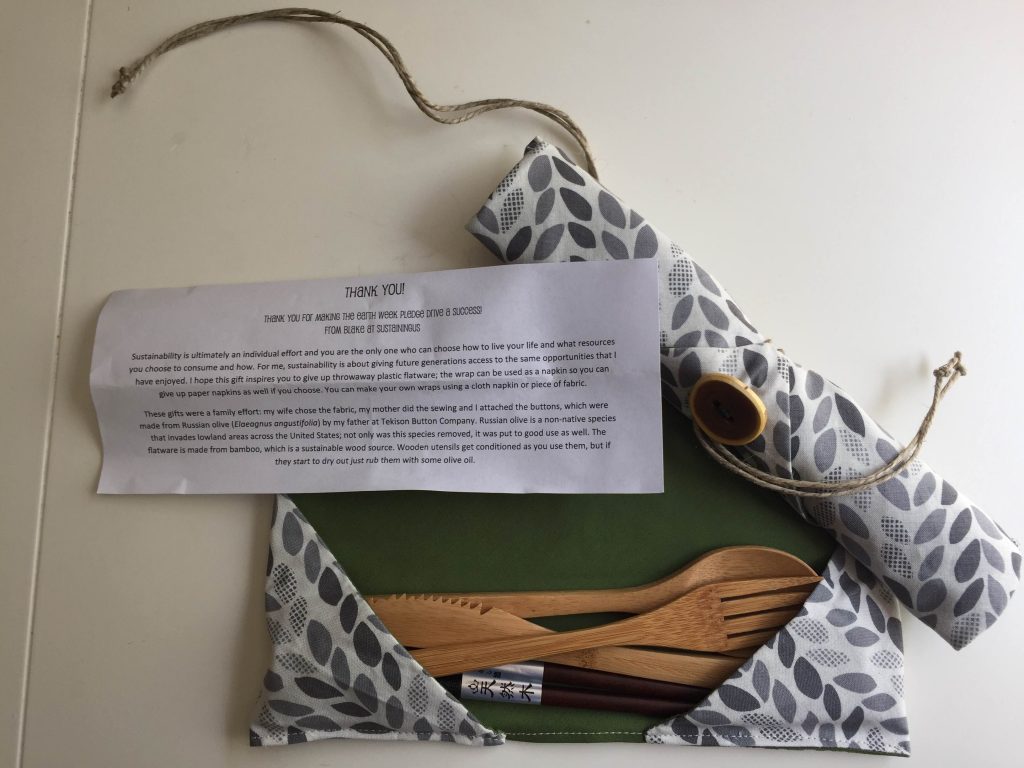 I made bamboo flatware thank you gifts for the students that contributed to the pledge drive to congratulate them on their success and to show my appreciation for their hard work!